The fear that applications use the microphone or webcam of our devices to spy on us grows increasingly, and not for lack of reasons. The last, the official application of the Spanish League, which in addition to giving you all the information about what happened on the pitch doubles functions such as sneak bars or other establishments that put the matches without their corresponding license.

To achieve this, use your phone’s microphone to make a kind of “Shazzam” of football matches. If there is a match, La Liga takes good note of the location of the device to check if it is a retransmission without a license or not.

You are a snitch, “without knowing”

This espionage function could hardly be said to be a secret, because thanks to the benefits of the GDPR , the application needs to inform you of this data collection the first time you open it. Of course, as you can read, in a paragraph of seven lines, the mention of fraud detection arrives conveniently in the fifth line, probably wishing you to get tired of reading before and pass it by.

Fight against fraud in the broadcasting of sporting events of La Liga is normal, as explained in a special note that has been added in the application itself. What is perhaps not so normal is to use the users of an application for it, when the app is something totally different: information about La Liga. These users become snitches, in many cases without knowing it .

There is no lack of irony in the matter either, since the user himself is the one who gives away the bar in which he is watching football , in a way boycotting himself the future fun. In the note it is specified that La Liga does not have access to the content of the audio recordings, but only to your IP address, your user number in the app, as well as if you are watching a La Liga football game … and where.

Use of data? Effectiveness? 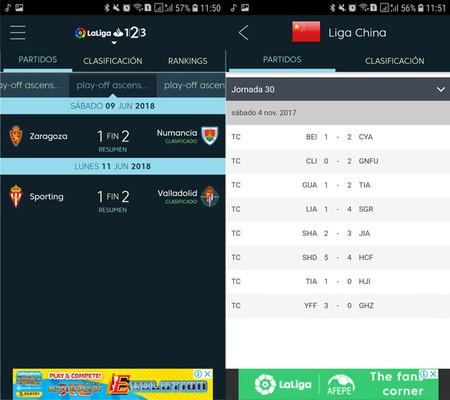 The explanatory note included in the application almost leaves more unknowns than it solves. One, important, is the use of data . That your mobile is constantly sending audio fragments (or binary codes, as stated in the note) must have some cost.

Not much is mentioned about it, beyond that the data collection through the microphone only happens coinciding with schedules of La Liga football matches . Something is something, but the schedules with football matches cover a large number of hours a week, does that mean that the app is sending data all this time, looking for a match?

Another point to keep in mind is the effectiveness of this fraud detection method . In most cases, people watch football indoors, which means that GPS will not be operational. The location will therefore be approximate . Neither is the system precise enough to detect if you are watching football on the ground or on the fifth floor of the same coordinates, so these data would be rather first tracks, not at all conclusive.

What can you do about it

If the above seems wrong, the best thing you can do is uninstall the application . Let’s be honest, the application is not so good as to be irreplaceable. Google itself and its Assistant allows you to follow the progress of your favorite teams in real time.

If you prefer the official La Liga application, the best thing you can do is go to the application’s information window (Settings – Apps – La Liga) and touch on Permissions . Here you can disable the permission to access the microphone and the location. The app will keep asking you from time to time, but if you check the “do not ask again” box, it will leave you alone.