We recently showed that a certification at the FCC brought information that Xiaomi plans to launch a cheaper version of the Mi A2 . As we know, the previous generation of this device was quite successful in the market because it has Android One.

Now, having even had its firmware leaked , the Xiaomi Mi A2 has passed benchmark testing on the Geekbench . Because of this, we now have confirmation that all specifications of this device are identical to those found in the Mi 6X .

Until then, no news, since the Mi A1 was released in the market with the same hardware as the Mi 5X . However, this eventually puts into disrepute some previous information about a Lite version of the device . Check below the Mi A2 score on the Geekbench. 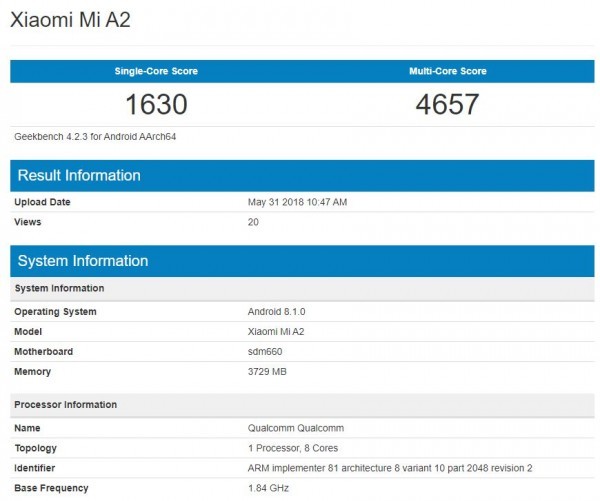 Running the Android 8.1 Oreo, Mi A2 performed well on the Geekbench. In addition, we already know that it will hit the market with Snapdragon 660 chipset , 4 GB of RAM and a 5.99-inch screen.

The Mi A2 should also have two 12MP + 20MP rear cameras, and the front has 20MP resolution. For now, despite all the tests and information revealed, Xiaomi still remains in complete silence about a possible release date for this device.

Even so, many point out that the Chinese giant should follow the same schedule as last year and announce the Mi A2 shortly . That’s because the Mi 5X was released in August and the Mi A1 in September.

This year, the Mi 6X was announced in April, so it is very little time for the arrival of Mi A2. It is worth remembering that today (06/06) the company released the release dates of the Redmi 6 family .